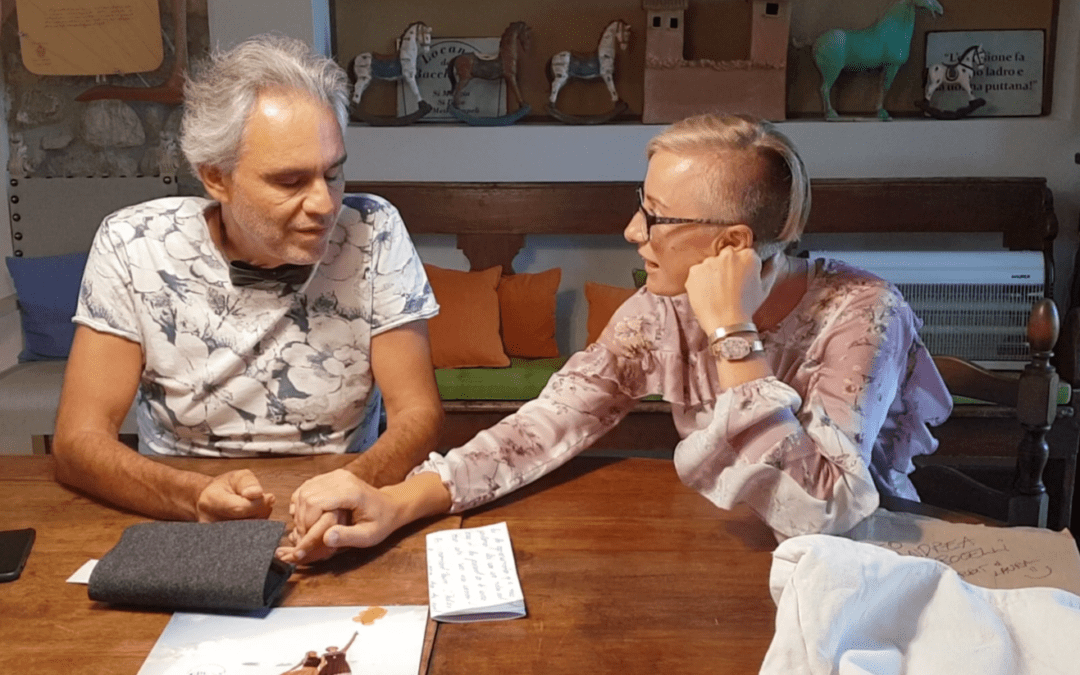 “I like to think that I play a part in Andrea Bocelli coming to perform in Estonia,” smiles Errit Kuldkepp from Pärnu. The woman was lucky to visit the world-famous star at his home last summer and to introduce Estonia among other things to him. More pictures here

Errit Kuldkepp (35) believes that one should dream bold. But not only that—dreams come true if you take actions.  She has reached one of her dreams—to visit the world-famous Italian star, Andrea Bocelli. The big event started with one e-mail. Let us talk about it all from the beginning.

Bocelli’s music has accompanied Errit, who works as the marketing manager of Pärnu Hospital, for almost 20 years. “His songs are calming and inspiring at the same time,” the woman notes. Thus, she wrote her Master’s thesis in Gozo, an island of Malta, getting energy from the songs of Bocelli.  Errit’s true favourite is “Dare to Live”—a song that encourages to live and to forget the past. “This is my hymn,” she admits.

Errit does not lack courage. She helped to catch a thief in the market in the spring of 2017, and in autumn her quick and courageous deed was awarded the badge of honour for civil courage. The woman attended the concert of Andrea Bocelli in Riga already the next day. The influence of the emotions from the previous day and the atmosphere prevailing in the hall had such a powerful impact on Errit, as if she had been driven over by a road roller. In a good sense, of course.

Errit is a woman who inspires the people around her to find beauty in simple things and to enjoy everything there is. Therefore, she always speaks out whenever she likes something. So, she felt that she wanted to thank Andrea Bocelli for the powerful concert.

“How to do it, though? How could my words really reach him instead of being forgotten about on the producer’s table or someone reading my words passionlessly to the blind musician?” were the thoughts in Errit’s head for a couple of days. Errit decided to film the feedback and sent it to numerous places, which she found to be connected with the world-famous tenor.

So much time passed that Errit managed to forget about her letter. Until one night she received a letter from Giorgio, Bocelli’s friend and business partner, who was very moved by the feedback from the Estonian woman. Together with Giorgio’s letter, there was a letter in Italian from the singer himself.

Errit was so excited about it that she shared her joy with many acquaintances. “I perceived disbelief in people. Mostly, it was thought there was no reason to be happy—it must have been Bocelli’s marketing department that sent the letter,” the woman smirks now. But she did not fall into despair by any means, because she knew that not everybody understands the value of such feedback.

Her joy was increased by the fact that she started to receive feedback from different places where Errit had sent positive words to Bocelli. She had a longer correspondence with one travel agency manager Maurizio, from Great Italy Tour, who organizes culture tours in connection with the tenor namely to Bocelli’s place of residence. Lajatico  “This is a small place, but so rich in content,” Errit knows now.

In one of her letters, Errit happened to mention to the man that she would like to attend Bocelli’s concert at his neighbourhood—a concert hall named Teatro de Silencio situated in Lajatico, Italy Being a fan, the woman knows that concerts which happen there once a year have become a tradition. The singer bows to the people of his home with these concerts. The travel agency manager declared then that he would like to gift these tickets to Errit.

“I was really thankful but also cautious. There are lots of promises in the world which remain nothing but promises,” the woman has experienced. When the travel agency manager was out of the picture for a few months, Errit figured that there was nothing more to it.

When it was a bit more than one week to the concert, Errit received a message from the man: “You have the tickets.” “You don’t talk to me for months until now?” was her first reaction to the message. The man apologised that he had lots of work and sent a photo of the tickets to the Estonian woman.

Making travel preparations in a haste, Errit had another crazy idea and wrote Giorgio: “Do you think I could meet Andrea Bocelli?” “You know, I am honest with you like we are here in Italy—never say never. I’ll look into it,” he replied to her. She received a message then that it would be possible if she arrived a few days earlier. Errit could not believe her fortune: “It seemed completely unbelievable. Millions of fans all around the world would love to meet him, but a woman with crazy ideas from Pärnu actually succeeds in it!”

As the woman’s goal is to inspire people to live more courageously, she decided to take on the adventure. She created a website named “Vivere….Positively Inspiring Lifestyle Journey to Meet Andrea Bocelli” , where she continuously provided an overview of her journey, and bought plane tickets for herself and her friend Laura.

There was lots of hurry on the important day. The plane was late, and thus the women had only 40 minutes to drive on strange and winding roads to Bocelli’s house. Thanks to the slight delay, the Estonian women had just 20 minutes to spend with Bocelli. Errit states that it was a great experience for her and also a lesson, because she had to keep in mind at every step that her conversation partner has no sight. She had put everything she wanted to say to Bocelli on paper, so that she would not forget anything because of excitement. She read her words out loud to the singer.

“Bocelli was grateful and moved. I can only imagine it, though, because one could think not many fans reach him. Although he is world-famous, he is still a person and wishes to hear how he has inspired someone with his talent and personality,” mentions Errit.

He was really happy about the gifts that Errit had chosen for the blind musician and his family in collaboration with Estonian designers (funded by herself). Andrea and his sons (Matteo and Amos) got leather bow ties with engraved initials by De Moog Design House, his wife Veronika received a golden cup (Errit is holding on the picture) by Liisu Arro with a hint to take some time for herself, and their daughter Virginia was gifted a butterfly by Kuma. Bocelli’s team received presents as well. Andrea liked especially the bow-tie, which he put on right away.

Bocelli asked about Estonia among other things. “A couple of months after coming home I heard that this year (2019) Andrea Bocelli will perform at the Tallinn Song Festival Grounds,” rejoices Errit. Most certainly, she has a ticket to the venue already.

Reminiscing on her visit, the first keywords that come to Errit’s mind are cosiness and warmth. “It feels really good to be in Bocelli’s company,” confirms the woman.

Errit and her friend Laura took plenty of photos and videos on their trip and posted some to Instagram and the homepage from time to time. “With my journey, I would like to emphasize that it is important to fulfil your dreams. We create the values in our life,” the woman attests.

The feedback received from other fans indicates that the women were on the right track. Many of them have shared stories about fulfilling their dreams with Errit, and also about how Errit’s journey has encouraged them to do something in their own lives. For example, thanks to following her journey, one small girl from Pärnu had the guts to talk to her great idol Arvo Pärt after his concert.

Now, Errit thinks about realising her next dreams. She would be excited to meet Michelle and Barack Obama as well as Oprah.