What is Errit’s formula for happiness? 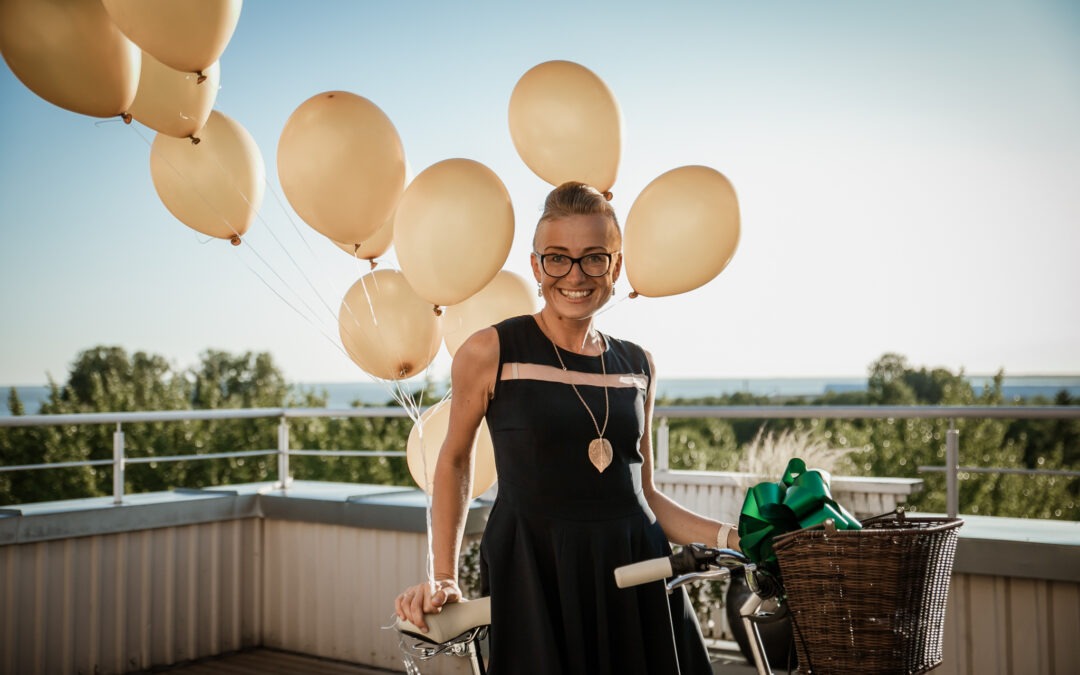 Hello, Errit. I’m so glad you agreed to meet me. I should tell you that one of the reasons why I wanted to share our conversation with the readers is because you at least seem like a carefree doll enjoying life at the shop window. It seems as if you’re on something or have found the formula for happiness that we’d like to learn, too!
But let’s start from the beginning – are you from Pärnu?
[Smirks]
Eh. It’s an interesting observation you have. Let’s see if we can find my formula for happiness. [The smirk has turned into a laughter]
But yes, I am from Pärnu. Through and through. I grew up on Aisa Street in Pärnu, and in my childhood we even had a kind of gang there who would adventure all over town – from Tammiste woods all the way to the seaside shore of Vana-Pärnu.

What were you like as a child?
Quite independent. No, not due to circumstances, but because of my personality. My mother has also told me that I didn’t have this great need for attention, and that I was preoccupied with my own things. In that same gang, my active nature often put me in the leadership role.

Rita, Errit’s mother:
As a child, she loved to draw. She wanted to become an interior decorator so that she’d have the opportunity to make other people’s homes beautiful and comfortable.
I have always accepted her decisions.
Her teenage years were difficult for her, because she was always so nice to everybody and she was taken advantage of because of that.
I am truly happy to be the mother of such a girl.

Was your childhood easy?
My real childhood was carefree enough. Difficulties, and I mean real difficulties, crept up in my early teenage years. Until then, I mostly cruised along life. When I was 12–13, I got caught up in turbulence that’s a bit difficult to recall now. I’d rather avoid going into details, as there was a lot of hurt there. Both being taken advantage of and being disappointed in people. I was pushed aside and paid no attention to. There was a time I made an effort to get attention, but to no avail.

I should point out that it was actually a period that got me to where I am now.
I was rattled very heavily in my teenage years.

Being taken advantage of?
Yes, but let’s not talk about it in the interview, please. I hope you’ll understand.

I agree but you mentioned that without them you wouldn’t be who and where you are right now.
Exactly. I don’t believe in accidents and I think that my experiences had some sort of a profound effect on me. Considering the experiences and disappointments of my teenage years that wouldn’t be easy for an adult that doesn’t have the added pressure of hormones in turmoil either, I’m of the opinion that it was something more than a tragedy.
I have thought about that time a lot and attempted to find answers, and I’m confident in saying that it taught me to forgive. Not just say “I forgive you”, but to sincerely and completely forgive. Because what’s the use in holding grudges? It only ruins yourself. It makes life difficult.

Looking at you now, it’s hard to imagine.
When you fall, there’s no sense in crying on the floor. You have to get up and keep moving. My high school years were the period when my surroundings started to form some sort of a logical image.
It was the time when I was noticed as a woman for the first time. Until then, I was a very broken teenager living like a shell of a person who had no belief in herself or her compatriots. I didn’t know how to value myself.
A young man who gave me attention caused peculiar and unbelievable feelings in me.

Despite the fact that I was enjoying rays of sunshine in my life after a long time, I decided to end this relationship that had lasted for a few months in order to work in the US and gain experience.
I didn’t know how to explain why I did what I did, but I knew that I needed a change of scenery.

Errit was a nanny in the US

Why the US?
On the one hand, I had the opportunity and the desire to see the highly acclaimed American dream. At the same time, I felt that I couldn’t keep on living the way I was living.
In the US, I started working as a nanny. You probably want to know if I regretted it, because let’s admit it, I didn’t find my American dream.
I didn’t regret it, because my life back there brought a huge amount of new emotions for me and I didn’t even think about the people back home. I didn’t really even have time for it. New culture, new way of life. For the first time in my life, I had to make responsible decisions. I was no longer under the safe care of my mother and relatives.

I enjoyed my life back there. In my free time, I spent time in the nature and enjoyed being alone, not drinking and partying with other young people. In the end, I started looking for myself. Trips that were almost meditative became important to me.

This desire to go away and travel still lives in me to this day. Coming back to Pärnu, I felt that all is well, but I can’t be in my childhood home anymore – I have to see the great big world. I had to find the meaning of my life and my calling.

Oliver, Errit’s life partner:
I think her strengths are her ability to communicate with people and her positive attitude even in complicated situations. I thought a lot about her weaknesses and there’s actually nothing specific I could point out. Of course that doesn’t mean that she doesn’t have any (everybody has their weaknesses), but I can’t say anything specific. I’d characterise Errit with the words “remarkably unique”.  All people are unique, really, but the question is whether and how much others notice it. People are often too scared to be too different from others and are focusing on what others must think.

You haven’t been back to the US anymore and you have bound your life to Pärnu. How do you satisfy your need to travel and go on meditative trips? Let me stress that I love Pärnu – it’s the best town to live in.
Satisfying my passion for travel isn’t as easy as one might think. But I recall that I was supposed to go to field training in Greece, but unfortunately it wasn’t possible due to various circumstances. That’s when I started to send my CVs to different companies associated with tourism.
The Maltese island Gozo sent me a reply that everything seemed to be perfect, except for the fact that I was overqualified.
I asked them to not focus on my CV and instead give me an opportunity to work with them and for them.
I got the opportunity and after two weeks there, I felt that this place was made for me. Strolling in its nature, I felt something inexplicably calming and at the same time energetic that has made my life complete. I have pretty much reached an understanding about myself there, too.

What has been your greatest disappointment?
That’s a difficult question to answer and brings to mind a lot of thoughts that could be classified under disappointments or failures. One of the hardest fights was years ago when I was a mistress. At the time I lost, found, lost, found and lost myself countless times.
It was emotionally very exhausting.

Did you know that you were a mistress?
Yes, but even so. I think that women who have had a similar life experience understand that it’s not a black-and-white situation. There are a lot of different shades.
But we ended this folly. We could say that we tried to end this for nearly a year, but the final decision was mine.
By the way, I’m very happy about this ending, and I’m also very happy for the man and his wife. They have children now and their life is beautiful.

Another phase that taught you?
Oh, yes. I knew back then already that I’m yet to have a visit from karma.
And I got my hit of karma.

Does this mean you partner had a mistress, too?
Yes, my first more serious relationship started backwards, let’s say, being with a man who had someone else in his life. The first months something started to feel off and I bombarded him with different questions.
I was abroad when the truth came out with an explosion. Oh, how many “teachers” I suddenly had in my life. When I came back to Estonia, I sent him a message, telling him not to meet me at the airport.
But he still had the guts to come, and now we’ve been living together for a little over ten years. We have subsequently looked at the puzzle we’ve put together with humour. It was colourful, but taught a lot to both of us.

Ülle, Errit’s colleague:
Errit is a colleague of your dreams. She notices and listens to the ideas and opinions of her co-workers. Her excellent trait is giving more than is expected of her.

What has been the greatest accomplishment in your life? What has been the golden apple of your life?
Thanks to my experiences in Gozo, I have found my inner peace. I can confidently say that my purpose in life is cultivating self-belief in others and having a positive effect on them.
I want them, too, to listen to their inner voice, letting it guide them to the right paths.

This sounds like an introduction learned from a self-help book or a kind of tantric saying to start and end the day with!
That’s the purpose of life for me.

Thank you very much!
Thank you for a pleasant conversation!